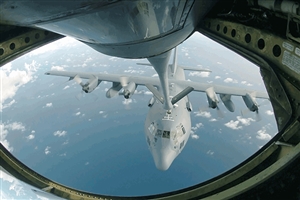 With an increased focus on strengthening United States military capabilities for the 21st century, Parker Aerospace takes pride in having a long history supporting the country’s defense endeavors around the world with flight-critical components. One of Parker’s most essential product lines for military aircraft is its aerial refueling equipment. 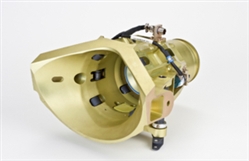 Aerial refueling is the process by which an aircraft is loaded with fuel mid-air while still in flight. The crucial operation allows military craft to fly prolonged maneuvers and reconnaissance missions. In some cases, our inflight refueling equipment has been incorporated into platforms derived from commercial aircraft. One noteworthy example is the Boeing 747-200 used for Air Force One.

Parker’s development of in-flight refueling equipment began more than 55 years ago with Lockheed Martin’s reconnaissance aircraft, the SR71 Blackbird (1964). Parker designed the aerial refueling receptacle for this historic aircraft. After advancing early variants of a universal aerial refueling receptacle slipway installation (UARRSI) for the development of the Rockwell B-1 Lancer and the Fairchild A-10 Thunderbolt, Parker’s expertise was again put to use on the refueling receptacle for another U.S. fighter jet.  In those early days of evolving aerial refueling solutions, Parker augmented its knowledge base through the strategic acquisition of Schultz Tool and Manufacturing in 1971 a company that had designed receptacles for the F-111 Aardvark, the C-5 Galaxy, and the A-7 Corsair II.

Building on the technologies and applications from Parker, Shultz and XAR, our teams developed a unique receptacle and slipway assembly for the B-2 program. Since this time, Parker has subsequently designed multiple derivatives of the UARRSI and application-specific receptacles for several programs including the F-22 and F-35 programs.

Utah Air National Guard members from the 191st Air Refueling Squadron execute an air refueling mission from a KC-135 Stratotanker. A B-2 Spirit from the 509th Bomb Wing at Whiteman AFB, Missouri participated during this training mission. Video by Staff Sgt. Erin Mills.

The multi-purpose UARRSI convenience and adaptability 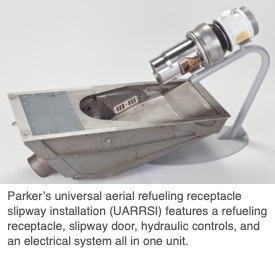 In 1976, Parker introduced an improved universal aerial refueling receptacle slipway installation (UARRSI) which has proven to be Parker’s most versatile piece of aerial refueling equipment. UARRSI adapts to aircraft that require a nozzle and receptacle-type apparatus. The unit features a lighted slipway and voice command functionality to facilitate the fuel transferring process. UARRSIs are used on military aircraft including the Boeing C-17, McDonnell Douglas KC-10, the Airbus A330 MRTT, and the Boeing GTTA, P-8A, and the 737 AEW&C E-7 Wedgetail.

Parker’s aerial refueling ground test kits are used to evaluate at the aircraft or component levels, along with the voice inter-communication capability. This testing function allows engineers to assess specific status modes (connect and disconnect), as well as alignment and engagement states of the equipment. Parker’s product line conforms to original equipment manufacturing (OEM) specifications, U.S. military standards, and additional requirements developed by the Aerial Refueling Systems Advisory Group (ARSAG) and other like agencies.

Supporting the next generation of aerial refueling 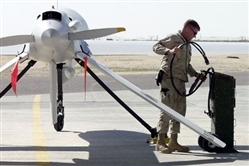 The future of in-flight refueling technology is now taking off in innovative directions, with a renewed emphasis on safety and efficiency. Aerial refueling for helicopters and unmanned aerial vehicles (UAVs) is also an active field of development. As the technology evolves, customers may see updated offerings from Parker based on our extensive pedigree, and our always-advancing capabilities.

To learn more about the capabilities of Parker's Fluid Systems Division, please visit our website.

This blog was contributed by the engineering team from the Fluid Systems Division of Parker Aerospace.

Defining Our Unique Contribution to the World

Reducing Lead Times by Half Earns Praise from Customer GA-ASI

Follow our Aerospace Technology page and learn more about Parker's products, technologies, and engineering solutions that are advancing the global aerospace fleet.