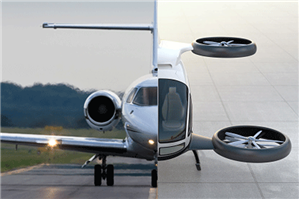 The future of air travel is evolving beyond fossil fuels with hybrid electric and all-electric aircraft leading the way. The growing need for low emissions and carbon neutrality has created a new focus on more electric aircraft (MEA), as aircraft original equipment manufacturers (OEMs) look to satisfy the growing needs of travelers while achieving the environmental goals being mandated around the world.

The evolution to MEA changes the way these systems are implemented. Whether it’s a more electric aircraft with jet engines, a hybrid electric, or a fully electric aircraft, mechanically-driven pumps for hydraulics, pneumatics, oil, and fuel will be replaced with fully electric pumps and actuators for everything including flight surface controls, environmental systems, and braking.

Initially, gas-powered engines will still drive the electric generators for these systems. Ultimately, gas turbine engines may be replaced entirely with fully electric motors and batteries. This migration will start small, with commuter transports and urban air mobility platforms first reaching the market.

Migration from hydraulic and pneumatic energy to electric energy requires improved power-handling capability and efficiency. System voltages for MEA will climb from 28VDC and 115VAC to upwards of 1,000VDC. This power will be delivered by a complex combination of generators and batteries and requires a highly advanced and flexible electrical distribution system capable of managing system needs.

Along with the increase in demand and capacity, the potential for significant damage during short or overload conditions must be recognized. For example, a 270V Li-Ion battery can deliver more than 2,000 amps into a short in a matter of microseconds. The typical electrical interfaces on today’s aircraft consist of mechanical relays and contactors, which are not fast enough to prevent fault propagation, and may even fuse during a fault event. This drives a need for an effective solution for high voltage, high-power buses with enhanced capability.

To answer that call, Parker Aerospace’s Fluid Systems Division has been developing a modular solid-state power controller (SSPC) for use as a standalone unit that is an electronic replacement for a relay or contactor. As part of a larger electrical distribution system, multiple SSPCs can be configured into a solid-state electrical distribution unit (SSEDU). Think of an SSPC as an individual circuit breaker whereas the SSEDU would be the entire circuit breaker box containing multiple breakers. An SSEDU can be configured with two or more SSPCs, with each SSPC being an individually controlled channel.

Utilizing advanced silicon carbide technology, Parker’s SSPC design is a modular architecture that yields the potential to accommodate multiple platform applications without costly redesigns and qualifications. Some features include:

An individual SSPC can be programmed and coordinated with other SSPCs to provide staggered power on/off configurations when used in a multi-channel configuration. Power sequencing, source and load isolation, power routing, and bi-directional flow for battery charge/discharge, can all be configured in the same SSEDU. Voltage, current, temperature and other performance and fault data is available for each SSPC.

The Parker Aerospace modular SSPC design provides benefits beyond the technical specifications. The initial concept was to provide the protection and control in a format that would allow scalability and flexibility in an electrical distribution system implementation. Taking advantage of the common SSPC design allows for:

Current development on the second-generation SSPC will culminate with a two-channel unit in a more compact, thermally efficient, and lighter unit. This fully capable demonstrator will provide an example of how the Parker Aerospace SSPC and SSEDU can be utilized for multiple applications and configurations requiring the control, protection, and flexibility required to satisfy the needs of the new generation of more electric aircraft.

This blog was contributed by electronics engineering manager Andrew Walsh from the Fluid Systems Division of Parker Aerospace.

Defining Our Unique Contribution to the World

Follow our Aerospace Technology page and learn more about Parker's products, technologies, and engineering solutions that are advancing the global aerospace fleet.