What is Drive Controlled Pump Technology

By  Rashid Aidun over 2 years ago 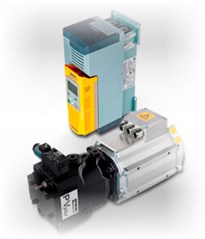 Drive Controlled Pump or DCP is an emerging technology which operates Positive Displacement Pumps at variable speed, unlike traditional industrial power units where pumps are operated at a constant fixed speed.

Hydraulic power has long been used in many industrial processes due to its inherent advantage to transmit a large amount of power via a relatively compact infrastructure of hoses or pipes. In many of these systems, the source of pressurized hydraulic fluid is the hydraulic power unit (HPU).

Traditionally in industrial machinery, the HPU’s hydraulic pumps are driven by a fixed speed AC motor. In the majority of these systems, the hydraulic flow and pressure exceeds the variable load demand. In order to match the supply to the variable load demand, flow and pressure regulating valves are used. These hydraulic devices regulate fluid power by dropping pressure across orifices, which results in energy losses in the form of heat. The heat is absorbed by the working hydraulic fluid, which needs to be removed in order to maintain acceptable system temperatures. By precisely matching an HPU’s output, flow and pressure to the variable load, these flows and regulating devices could be eliminated or simplified, resulting in the elimination of these energy losses. The end result is a simplified hydraulic system that will use lower displacement pumps, smaller reservoirs and smaller or no heat exchangers.

With years of experience in hydraulics and motion control, Parker’s DCP Technology offers a solution that allows hydraulic powered industrial machinery to operate more efficiently and at cooler temperatures while generating significantly less ambient noise. The key is to optimize the electric motor’s operating speed and torque to produce only the pressure and flow required at any given point in the machine’s operating cycle. This is accomplished by optimizing the hydraulic pump’s mechanical and volumetric performance characteristics as it relates to speed and pressure to a programmable variable frequency drive (VFD). The combination VFD and pump controlling algorithms (or macros) is called a Drive Controlled Pump, or DCP.

DCP technology provides a synergistic approach in which hydraulic power units, electronic drives, electric motors and hydraulic pumps are successfully integrated to meet each local load demand within a hydraulic system. Specifically, variable frequency drives manage the electric motor’s operating torque and speed, producing the precise, variable pressure and flow required at any given point in the machine or duty cycle.

Hydraulic systems are unsurpassed for their power density and power delivery. Electric motors and variable speed drives are great for their programmability and responsiveness. For many years, fluid power and drive system engineers could see the potential for combining the two technologies; however, initial attempts had limited success for a variety of reasons, and the combined technology remained relatively unpopular. In today’s manufacturing environment, the higher cost of electricity, the desire to improve the machine operator’s work conditions (noise and heat) and the increasing global concern for the CO2 footprint offer opportunities to reevaluate the combined technology.

The advancements in hydraulics and variable speed drives were running in parallel for many years, but on the opposite sides of the fence from each other. Once the engineers of both sides met in the middle and shared their knowledge, a door opened to a new way of thinking and problem solving. Combining VFD and hydraulics was difficult at first. VFD engineers had extensive experience with centrifugal pumps. However, the unforgiving nature of positive displacement pumps along with the incompressibility of hydraulic fluids demanded a different solution that challenged the engineers’ established methods. The combination of hydraulics and VFD has created a new type of system with lower noise, less components and higher energy efficiencies.