To access your Interact Xpress (XPR/XPR2) panel remotely through a router, use the basic default settings in Xpress Manager and the workstation panel, as though you are connecting to it locally.  Default Interact Xpress port is 1235, but that is user configurable.

The router must have the following ports open in its configuration to allow for the connection to be made.  For full operation we need the following Ports open (and forwarded when using NAT):

Port 843 is the Flash Security Port. We added the use of this port with Version 1.63 when Adobe suddenly added to Flash to close a security hole.  Most times when you see "Error during initialization Step 2" it is because either Port 843 isn't open or because flash is being blocked at the firewall in some other way.

There is no document at present that describes how to expose a unit from behind a router.

Be sure that all of the ports are open. Port 80 is almost always open by default but it is possible that the user sets all ports as blocked and opens only those needed ports specifically in his NAT table in the router or firewall.  Lately, we have run into a couple of users that had port 21 blocked which made it impossible to upload/download across the network.

Error message that occurs when port 21 is blocked by firewall (such as Windows Firewall) or anti-virus softwares (such as McAfee or Norton) (at the PC or router): 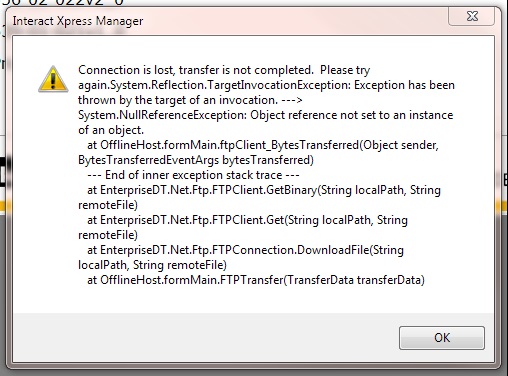 Connection is lost, transfer is not completed. Please try again.System.Reflection.TargetInvocationException: Exception has been thrown by the target of an invocation. --->