How to select user units and axis scaling

The ACR controller does not have a concept of inches, millimeters or degrees. It only knows User Units and counts/pulses. The axis setting/command, PPU (pulses per unit) allows the controller to internally convert User Units to Pulses.

A Master in the ACR denotes a group of axes that are governed by the same set of supervisor flags and can be commanded together in interpolated moves. When interpolated (coordinated) moves are commanded, the controller uses the Vector Velocity (VEL) and Vector Acceleration (ACC, STP, DEC) settings to calculate the trajectories of each axis. The units for these commands are scaled user units. That means for VEL 10, a linear axis scaled as millimeters will move at 10mm/s and a rotary axis scaled as revolutions will move at 10 revs/sec.

ACR-View prompts the user to select the programming units for the Master and "forces" all axes on that Master to use the same units for scaling. This was a design decision within ACR-View to simplify the configuration process.

However, for some systems like an XYZ-Theta arrangement, all the axes need to be on the same Master for coodinated motion but do not have the same type of physical units. For example, if millimeters are selected as the Master units, then only linear transmissions are made available in the Scaling screen. How to scale the rotary axis?

Solution:  For a mixed system, select the generic Other: Units. The individual axis scaling dialog will then allow the selection of linear or rotary transmissions. 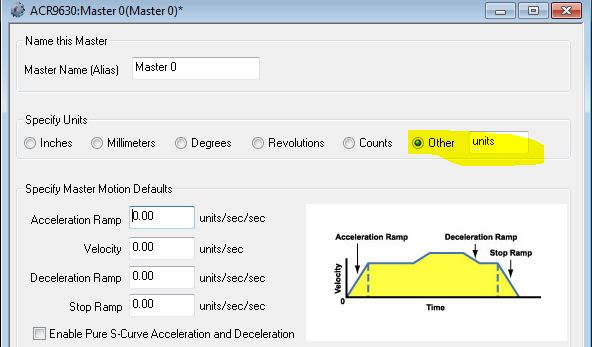 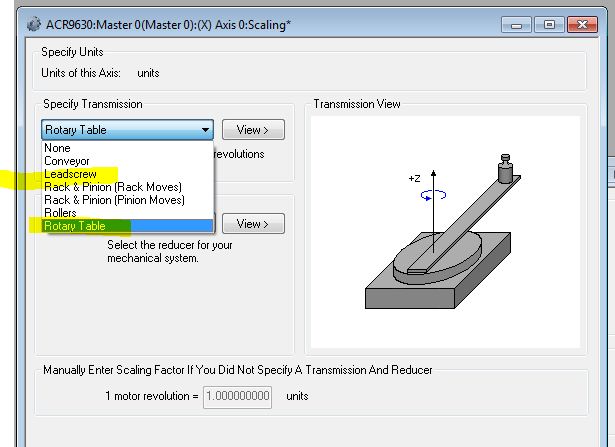