What replaces a SX drive?

Note that the SX are no longer repairable. There is no direct replacement for the SX drive. The best drive/controller to replace the SX depends on your application's needs. It would be good to contact your local Parker Automation Technology Center (ATC) to discuss replacement options with our newer products.

The newer IPA servo drive/controller is the suggested replacementbut the motor would need to be updated to a servo motor. Servo motors are closed loop (no stalls, no lost position), more efficient (draw power on demand not running full power all the time), run cooler and aren't noisy. The IPA has Ethernet communications making it easy to connect and can be run as standalone, has 7inputs/4outputs and can also be controlled via Ethernet/IP from an Allen Bradley PLC.  The BE series servo motors are NEMA frame sizes (23 or 34) and have larger shaft diameters because of the higher power. The newer P series motors are metric and could be considered if the mechanics can be updated, such as replacing a mounting kit on a gearhead.

In many applications using the SX, users ran different sequences stored within the SX. They weren't full programs. The Pseries Indexer drive (PD-04P) is more cost-effective than the IPA and could also potentially be used as a replacement with a servo motor (same as below list). It can store up to 64 moves. The moves can be absolute or relative or registration moves, repeated a user defined number of times and either stop and wait for a new input or wait a period of time and then start another sequence allowing multiple sequences to be chained together.

Below is general guidelines and comparisons: 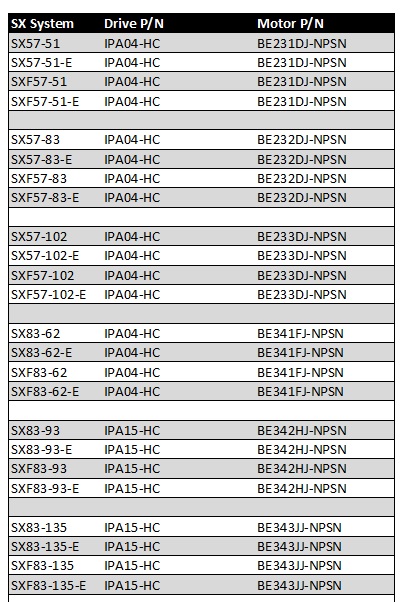 The below are other stepper drive controllers. The Gemini GT series are obsolete. The Zeta6104 and Zeta6108 were discontinued June 2018. The ViX IM is a legacy product and it's software doesn't work on newer 64bit Win7 or Win10 PC's. Accessories such as IO breakouts for obsolete products are generally not available.

The newer IPA or Pseries above is the recommended replacement for a single-axis motor drive controller solution.

The Gemini and Gemini6K was an advanced stepper drive controller, fully digital version of the Zeta series using MotionPlanner software, with command gain settings for anti-resonance, electronic viscosity and active damping (set via dial/dipswitches on the Zeta).

The Gemini and Gemini6K uses MotionPlanner software which is compatible with Win7 (32 or 64bit) computers. The GT6K also has Ethernet communication, though doesn't ship enabled from the factory (one time activate via serial).

The Zeta6104 (4 Amps) or 6108 (8 Amps) was the generation stepper/drive controller after the SX. Both the Zeta and SX drives run on AC power, are roughly the same physical size, and both have screw-terminal connections. The computational ability of the Zeta61xx is roughly equal to that of the SXF. However, it uses Motion Architect software which is only compatible with Win XP or earlier (not Win7). MotionPlanner could be used for program editing on Win7 for the Zeta. (See FAQ posting.)

If keeping a similar programming language is the most important thing, consider the OEM750X. It uses a more limited version of Compumotor's X-language. The OEM750X runs on DC power (24-75VDC) and uses one 25-pin connector. It uses XWare like the SX. XWare is only compatible with WinXP or earlier PCs.

The ViX is a programmable stepper drive. It's a DC powered drive (80vdc) so it may not have the top speed of the higher voltage SX (120vac = 170vdc bus voltage). The ViX uses the X language but isn't as full implementation of the X language as the SX. Also note, it uses EasiVsoftware which is only compatible with Win 7 32-bit or WinXP earlier (not Win7 64bit).

Related FAQ: What should I replace my S Drive with? (S3 Drive, S6 Drive, S8 Drive)

The SX was sold with S series step motors.  Example, SX83-135 was an SX drive with a S83-135 motor.  The motor can still be purchased with a -MO (motor only) at the end of the part number, ie S83-135-MO.  This includes the connector at the end of the cable. When ordered together, these shipped wired in series. However, users could change this in the field.

The Zeta and S series and ES series step motors (which are all the same motor) are being discontinued and are in last-time buy.