The following topics are common installation and/or configuration related problems that customers may encounter as well as a description of the symptoms.

The Power LED on the module will be off as an indicator that this is the problem.  Some modules may also show an Undervoltage fault (analog modules) if you are getting some variable updates.

The modules will come on-line on the EtherCAT bus since the bus derives its power from the controller but you will not get variable updates of the actual physical circuits (inputs, outputs, channels).

This is also true of other devices that may be on the EtherCAT bus as well. 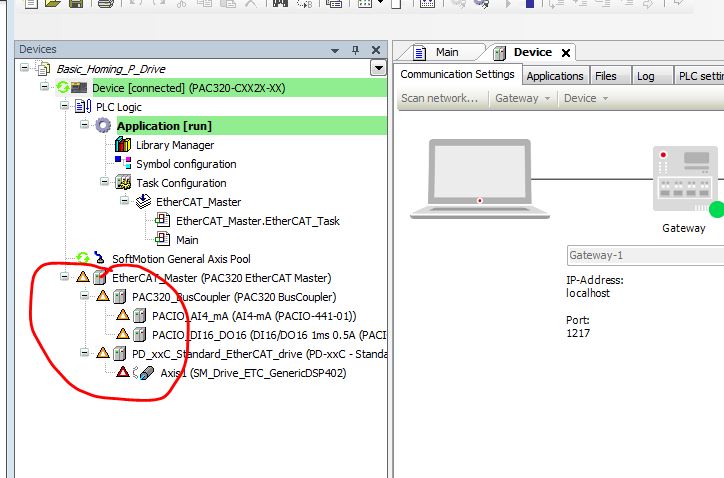 3.  This final tip isn't something mis-installed or mis-configured.  Instead, it is a default setting in your project for each device that won't update I/O unless they have been mapped to variables and are being used in a POU and thus being scanned in a task.

However, it's often useful to verify your physical connections before you have proceeded with much of your variable mapping and programming.  So, there are some settings you can change that will allow the I/O and variables to update even if you don't have POUs yet.

The simplest place to change this is in the PAC320 Device properties itself.  Double click on the PAC320 device in the project tree and select the PLC Settings tab.  The checkbox "Update IO while in stop" will allow the PAC to start the EtherCAT bus (but not any soft motion axes) once you go on-line without starting the PLC.  The second setting to change is the "Always update variables".  Change this to "Enabled 2 (always in bus cycle task)". 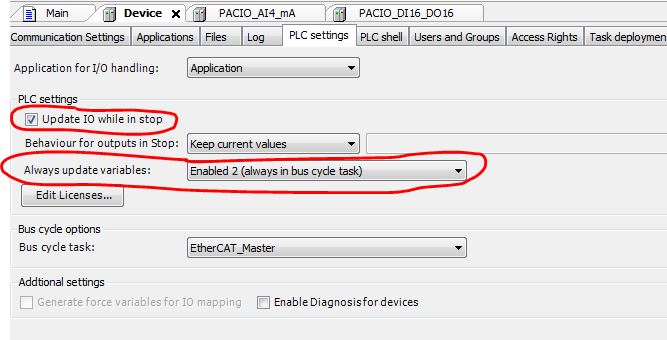 Now when you go on-line it will start the EtherCAT bus and update the I/O for all of the modules under their EtherCAT I/O Mapping tab.  You can also force outputs from this screen.

If you don't select the "Update IO while in stop" option you can still select the "Enabled 2 (always in bus cycle task)" option.  Then you will have to start the PLC for the I/O to update but you don't need the I/O mapped to variables yet with this setting.

Each device itself (PACIO or drives, etc.) will also have a setting similar to this for that particular device (as opposed to all of them updating).  This will be in the lower right corner of that device's EtherCAT I/O Mapping tab.  The default setting is "Use parent device setting" which is then dependent on the PAC PLC Settings mentioned earlier.  If you change this to "Enabled 2 (always in bus cycle task)" then this specific device's I/O will update when the PLC is running regardless of that similar setting under the PAC itself.  Useful if you just want to troubleshoot a specific module after installing it. 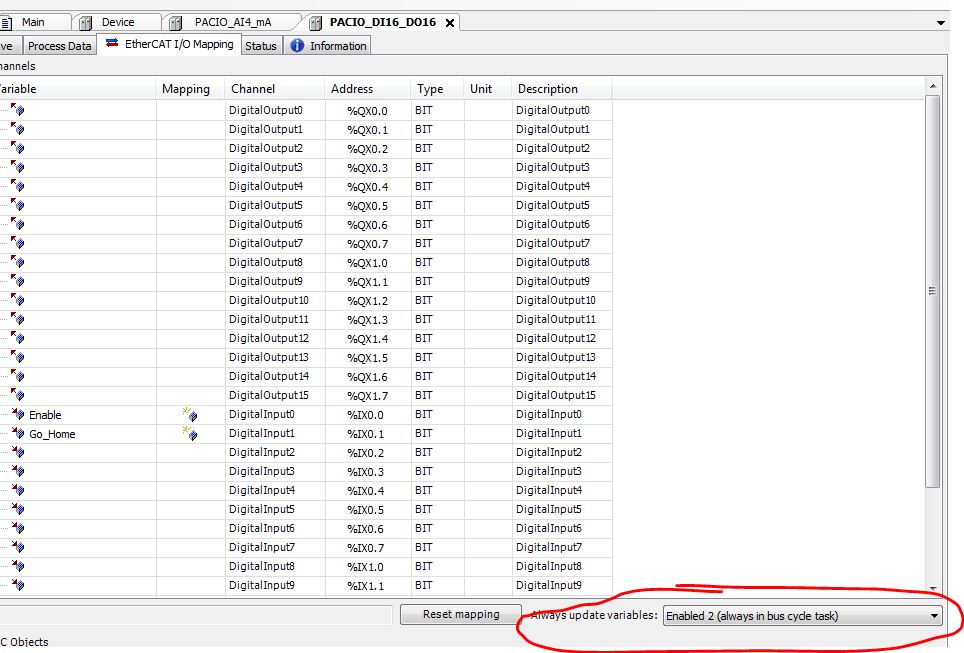