The 7000 series controller is designed as a replacement for the ACR9000, supporting both servo and stepper axes, up to 8axes.

The ACR9000's ethernet port did not auto-detect, 10/100Mbps. The ACR7000 does auto-detect straight-through or crossover ethernet cables and is 10/100Mbps.

Also known as the 7900, the 7000 series controller will have the same pinout axis connectors and discrete I/O pinouts as the ACR9000.

The 7000 controller will have 2 ethernet ports (a hub) that users can use (one tcp/ip address). The ACR9000 has one ethernet port.

It can also be a slave on an Ethernet/IP network for Allen Bradley PLC or an Omron PLC. This can be done at same time as being an ENIP master to a Wago 750.

No serial port, no usb port but 5 ethernet streams are supported (ACR9000 supported 4).

No IEC support (most users using the 9600 were using the AcroBASIC programs and not the IEC which wasn't expanded to work on Win10 anyway).

Same AcroBasic programming that's worked for 20 years with the ACR9000 will work with the 7000.

Same comACRserver: any PC communications (VB / LabView / .NET / etc) that OEM/machine builders/power end users developed works the same with the 7000 as the 9000.

The 7000 controller has 1 auxiallary encoder input and is 15pin D-sub and can only be used with incremental quadrature encoders; the ACR9000 had 9pin aux encoder ports (ENC8 and ENC9) that supported both SSI and quadrature encoders. 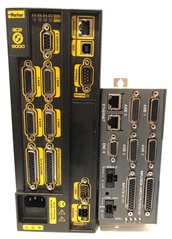 The ACR7000 series controller is same as a flash based ACR9000. To take advantage of the non-volatile parameters, users will need to change the parameters if they were using the battery backed ACR9000: 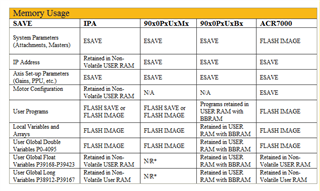 and made drastic improvements to the usability:

What I'd suggest doing is having ACR-View open with the project, side by side with PMM to go through the Configuration Wizard and set everything the same. Architecturally the same.
Old things taken out (CANopen, EPL), new things added in (easy to invert the default direction to define the other way as positive with simple checkbox, steppers + encoders now have Position Maintenance enabled, scaling for Parker actuators/precision stages).

The programs can be copy & pasted over. That's just text.

Defines are trickier as in PMM they're in a chart and would have to be inserted in the chart. You can get around this by copying the DEFINES and putting it at the top of Program0 like this (this will throw an error for each define) download but you can ignore the errors on the defines. An import feature will be added new future version of PMM.

PROGRAM
PBOOT
REM This is program 0.
...

Again, PMM removes some things like CANopen, EPL, etc that's not on the 7000.

ServoTuner is not part of Configuration Wizard anymore. The default tuning gains for servo axis is the same as the ACR9000 but you may want to change them. Scaling is the same so the number wouldn't change.
If using higher resolution motors (P series motors are absolute but from the drive is 10,000 counts per revolution coming back to controller; as compared to MPP/MPJ 1E encoder 8000 counts, BE J 8000 counts, SM motor E 4000counts)
you may need to scale down the gains a bit. With more encoder counts coming back, the tuning gains may need to be tweaked down a bit.
PMM's ServoTuner screen is really nice allowing easy testing of all the axis and adjusting the gain (No more setting Motion Code... download to Prog0 checkbox, setting the vertical scaling for channels with the AutoScale now in PMM).

Another thing to consider: Pseries drives has a more advanced tuning algorithm. The drive can be setup in step&direction mode. Then DST can be used to tune the drives (via mini-USB) individually.
The axis at the controller would need to be set as external stepper instead of external servo. This takes advantage of the tuning of the Pseries but limits that you cannot do a TLM (torque limit) on the axis to do a clamping/torque move vs a position move.