As of January 8, 2019 position and home sensors for the following series will have a new global part number starting with P8SAXXXXX: 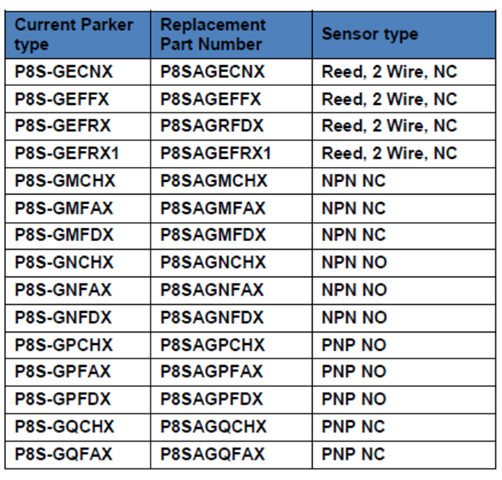 Change Impact
Differences:
· The next generation P8SA sensors differ in length than the current sensor. The new reed sensors with supply
voltage (VAC/DC) 5…30 and all solid state sensors are shorter (29.5mm vs.31.5mm), while all other reed sensors
are 1mm larger than the current sensor (32.5mm vs 31.5mm). Dimensional drawings of new sensors are below.

· The next generation has an improved fastening method. Instead of using an oval head screw, the next
generation sensor uses an eccentric screw fixed to the sensor housing. Thanks to the retaining ribs on the body,
the sensor holds its position even before the screw is tightened, ensuring that it does not fall out. In addition,
the rugged fixing screw holds the sensor in the desired position, even when subjected to shocks and vibrations.

· For servicing, the new sensors can be replaced without the need to remove the end caps from the cylinder.

· All new P8SA sensors will be delivered with a new plastic adaptor to fit in S-Dovetail grooves.

Similarities:
· Sensor technology, wiring capabilities, connector pin-outs, and electrical outputs are identical between the
current and next generation sensors 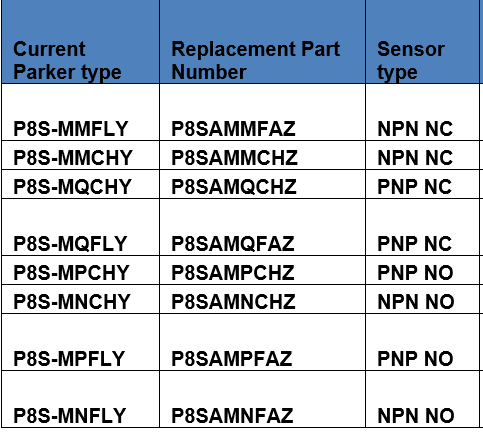