HMI units with the short model numbers were built over 20 years ago and have proprietary FLASH MEMORY modules. The Interact Applications running on those systems can only be backed up while the unit is functional.

There are no "Adapters" to connect those custom modules to make them readable by a PC. When the 20+ year old hardware fails, you would need an identical working units that you could put the old brick or simm stick memory into  if you do not all ready have backups of the applications.

With hardware that old, there is a significant risk to handling the memory modules and a possibility that the memory is damaged when the hardware fails which makes the application unrecoverable.

If the hardware fails, you can have your Parker distributor arrange an RMA to return the whole unit to the factory and we can attempt to retrieve the files but there is no guarantee that we would be successful depending on the condition of the flash memory modules.

The Flash Memory for the old P1 is the molded plastic module whose outline you can see on the left side of the image below. 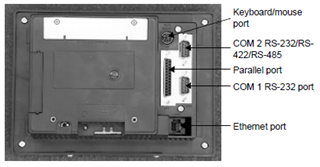 Later versions of the hardware have a converter that plugs into the connector for the original module and allows the use of a CF Card. (That adapter has not been available for over ten years)

From the back you can see the adapter and CF Card. 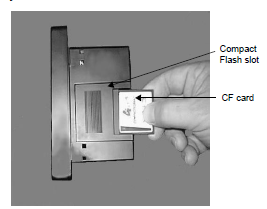 The Px-xxxxR flash memory modules look like DRAM SIMM memory and can occupy 1 or 2 slots on the mother board depending on the amount of flash memory purchased.

The slots are next to a column of chips and look like the image below: If there are two Flash SIMMs, they are position dependent and if moved to other hardware must be put into the same slots they came out of. 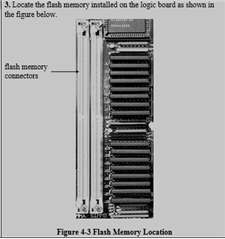 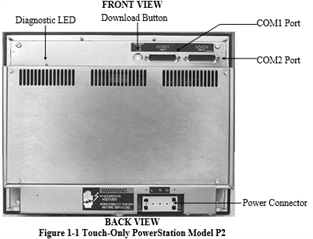 Lastly, the PWR family did not have FLASH memory because it did not exist when those units were manufactured. They used a type of memory that was battery backed. Any type of hardware failure or battery failure and the applications were lost.